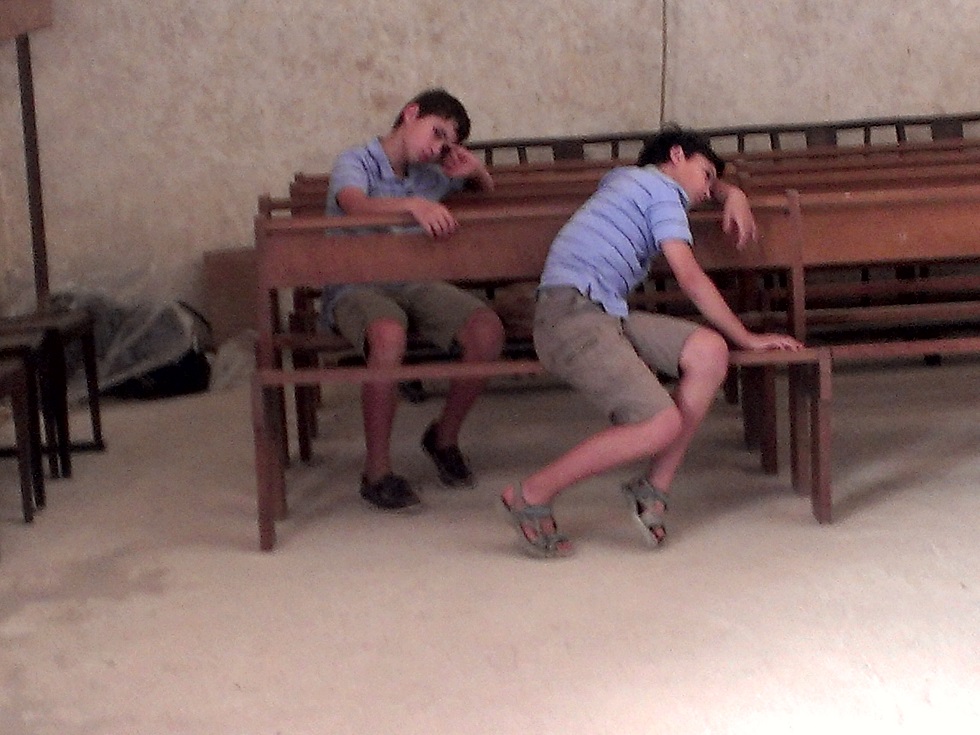 These two boys were sitting in an exquisitely beautiful, tiny chapel in France. The picture makes me laugh because it reminds me of how I used to feel at their age.  And still do although now I am supposed to hold such feelings in.  I sometimes fail to do this in the cinema or theatre and (apparently) start sighing a lot out loud.  I have a friend who used to come out of meetings with pages of detailed and rather lovely doodles which everyone in the meeting would have seen her making.  I never worked out how she got away with it other than no one wanted to confront her.  Last Christmas another friend bought me a mug with a Ladybird book cover on it: Shopping With Mother.  It reminded me of the times I went shopping with my own mother when I was a child and the excruciating boredom I went through, though I can’t remember what she was doing.  Trying on and buying clothes?  I still feel like this inside now and come close to behaving badly.  What holds me back is not that it would be considered as childish behaviour, but rather I don’t want to be rude to people – although I have failed really badly at this on a few occasions in the past and paid the price in the consequences.  I went to a series of talks recently, and the amount of people playing on their mobiles was astonishing.  Maybe some were taking notes but I could see a lot weren’t.  I was bored but I respected the fact that the speakers had taken the time and energy to put together their presentations and so I made an effort to look as if I was listening.   There’s a difference between being bored because you haven’t got anything to do (arguably those days are gone in the advent of mobile phones) and being bored by a situation.  I’m very reserved in public situations and would much rather observe than seek out people to talk to.  Hopeless as I am now trying to get a job.  That’s partly because I dread getting talking to some I don’t find interesting – I’m quite aware I bore other people – and I haven’t the social skills to get myself out of it with ease and charm as some people can.  Part of me will be screaming LET ME OUT OF HERE and a bigger part will see me through with a few  sighs and some feet shuffling. I’ve got to go to an event tonight and there’s a fair chance I’ll be bored and won’t talk to anyone.  Does it matter? Why go? Well, you never know.  I may be surprised.