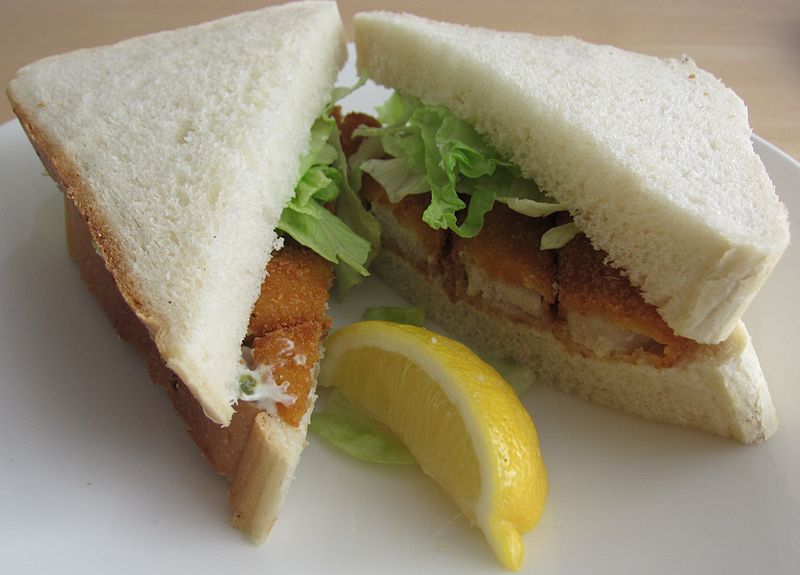 I know I could set the cat amongst the pigeons with the above photo having added lettuce and lemon, but I could not find a photo I could use with just the fingers and bread.  I could have gone out and bought the ingredients for a photo shoot in my kitchen….but it’s cold outside.  (Shame on me for not having any already in the freezer and this being north-east London I only have wholegrain bread)

the National Theatre’s production of Beginning by David Eldridge.  One of the high points of the play is a conversation over fish finger sandwiches.  Don’t let that put you off.

There’s enough on the web written about it and I am not going to repeat much of that here.

The play is around 100 minutes of two strangers having a conversation in one of their (new) flats.  The set is so realistic, it is absolutely like being in someone’s home; the attention to detail is extraordinary.  Just occasionally you get a match between script and actors which is so perfect that you forget you are in a theatre.  It usually takes me 10 minutes or so to get used two people talking on a stage in slightly artificial voices, and to worry about how stage management are going to deal with the props, and wonder if that lighting is correctly focused.  With this play I was watching to “real” people from the first line uttered. And night after night it gets richer and deeper as I notice more and more.  Justine Mitchell, one of the actors says the writer David Eldridge is “really funny, really soulful, [has an] incredible sense of rhythm – he really likes human beings”

The dialogue of Beginning is like a musical score with crescendos, silences, themes, variations, repetitions, climaxes.  The characters move around each other like a dance: coming together, parting, circling, walking away, remaining in stillness.  And this is underscored by the use of actual music and dance in the production.

Every night the audience laughs at different lines and moments.  Every night the audience is silent at different lines and moments.  Every reaction is valid.  I am finding the play really funny now, but I also hear the audience laughing when they feel awkward, unsure, embarrassed because it is so “real”. The dialogue specifically pinpoints the play’s setting in time and place, and already it is dated, but that doesn’t matter.  On one level it captures a time and a place, and on another it unfolds timeless human feelings and behaviour.  It’s about the possibility of a new beginning,  it’s about the possibility of another beginning, it’s about loneliness and it’s about connections.  It’s simplicity paradoxically highlights the contradictions, complexities and general messiness of our lives.  It shows us specific people and then shows who they really are, and for that reason it is a play that not only rewards more than one viewing, but I believe it will endure and continue to be revived.

I walk around backstage and still have to pinch myself.  It’s a great team of people of which I am part. Everyone is warm and friendly and funny. I am so fortunate. I still haven’t had the courage to tell the two actors what I think of their performances as I still can’t get used to them calling me by my first name.  It’s like magic watching them go from being themselves into character in a split second.

And just to add to the excitement of my life, last night during a big fight at the seafood restaurant next to the theatre, five fish got battered.