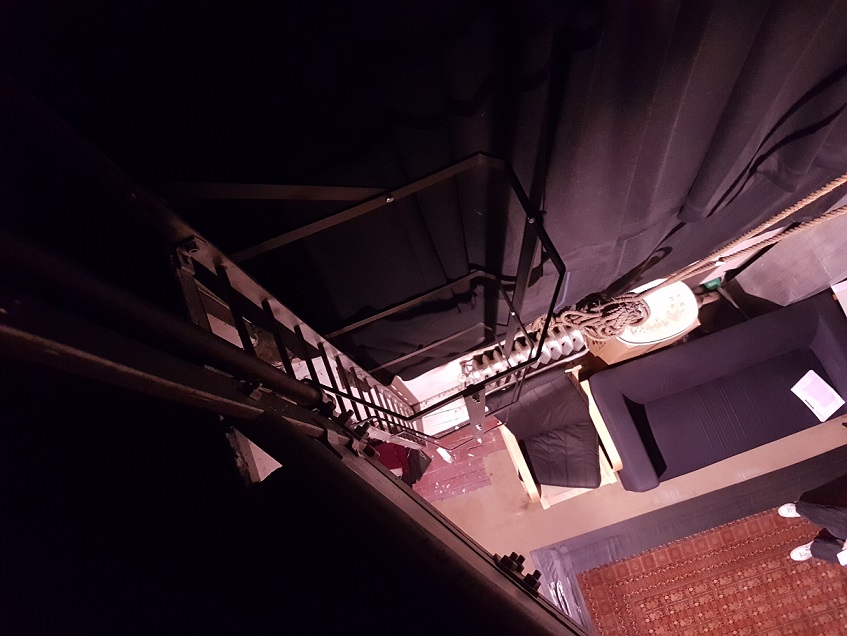 It is a bit tricky writing about the theatre from the perspective of someone who works on live performances but who also cares  that the magic of theatre is untouched, but it’s a balance I am striving to achieve.  Forgive me for any failings.

Some of you folk may be wondering about my flicker.  Well it’s very important, but I can’t say very much more about it, as it is part of a play steeped in  theatrical history, and I can’t give away its secrets.  What I can say is that I have the weight of that theatre history heavy on my shoulders.  The irony is if you were to watch me at work you’d probably think I had the easiest job in the world, but I have an enormous responsibility and with one twitch of my finger could bring about disaster.  I’m exaggerating, but only slightly.  My job adds to the reality and the mystery – the atmosphere, the magic – of  the performance.  Not one person in the audience will be thinking about the little factory of operations going on behind the scenes – without which there would be no show – because they don’t know about it.  As previously written on here I have the privilege of stepping through a portal (through the wardrobe, down the rabbit hole) into  a world that is a unique mixture of magic and the utmost banality.  It’s a world that has to run like clockwork, and yet it is at its most exhilarating when it doesn’t, for whenever possible the audience must not know that the cogs aren’t turning smoothly. Then the magicians has to summon all their powers to keep the illusion intact.  That may be a member of stage management or an actor improvising.  It may be me rethinking which button to push.  In each case the thinking must be fast and accurate.  At worst the theatre is a dangerous place where accidents can and do happen.  Many theatre traditions are in fact what we now call Health and Safety.

I’ll be flickering twice today.  Joking about it is a way of not thinking about it too hard. Deep down I am a little scared because these two numbers are watching over my shoulder.