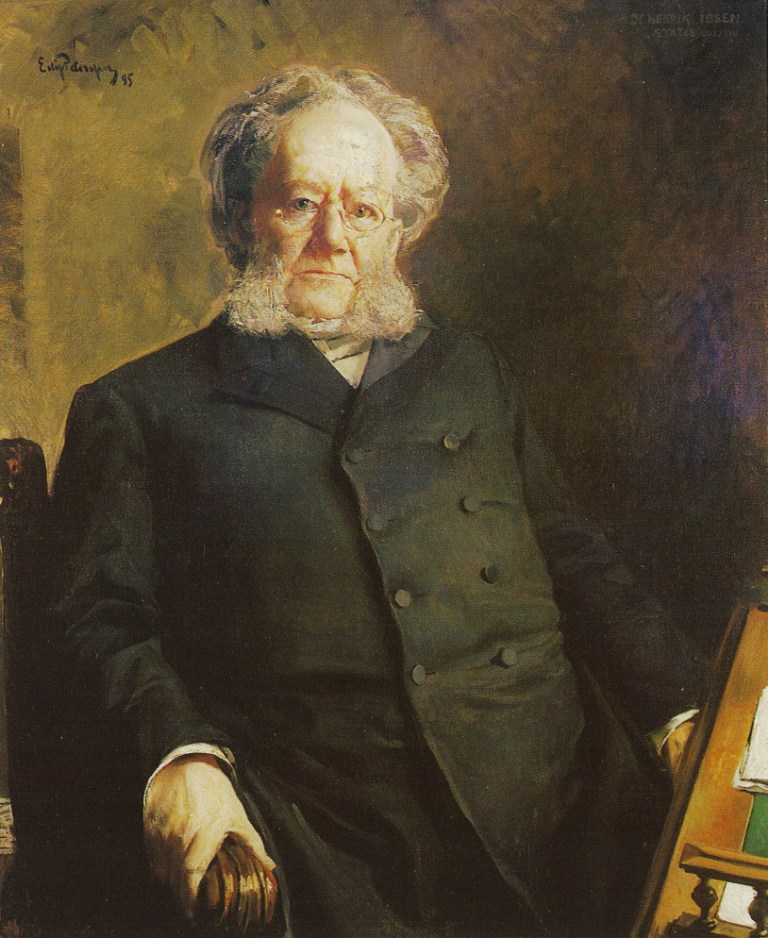 “My intention in giving it this name was to indicate that Hedda as a personality is to be regarded rather as her father’s daughter than as her husband’s wife.”                      Henrik Ibsen

A play first performed in 1891, written by 62 year old man, who here writes that the female protagonist has a personality, and that her personality is defined by men (father and husband).  Ivan Van Hove’s stark production at the National Theatre shows how utterly credible Hedda is, and what an extraordinary play it remains.

There does come a point when you cannot keep performing Ibsen in a look of its period.  If a play still resonates in its understanding and portrayal of humanity, then I think it can be played with, as long as it is truthful to the text.  A text may have different truths to different audiences, but truth is complex so that’s the way it should be.

Initially the white minimalist set seems completely at odds with the original stage picture that Ibsen has written.  However whilst Ibsen states the room’s furnishings are dark, he also states that the room is full of autumn morning light from the verandah window.  Here there is a patio window, through which bright light interrogates the room.  Likewise the original bouquets of flowers are now numerous buckets across the floor, the various spaces (hallway, inner room, verandah) seem to have become semi-hidden cupboards in the unfinished white painted walls.  And there’s an old upright piano, stripped of its outer boarding, which stands out like a sore thumb.  Before the action begins Hedda is folded over the keyboard, remaining invisible to the characters of the opening scene, as Berthe (who again invisibly never leaves the stage) looks on.  Gone is the portrait of hedda’s father.

So whilst this looks like Ibsen turned on his head, in fact it is no such thing.  It is Ibsen viewed from a slightly different angle.  Ibsen “the father of Realism” shocked his audiences with his portrayal of complex characters and contemporary social dilemmas and criticism.  His “realism” is so called because what audiences saw for the first time were the beginnings of an attempt to show “real life” on the stage in set design, acting style and by psychological realism in the text.  It’s pretty much impossible to shock nowadays, but there is a key scene in this production which made me very uncomfortable.  Judge Brack played with an increasing, subtle menace by a superb Rafe Spall, subjugates Hedda by pouring, and worse spitting thick tomato juice over her.  This literally foreshadows her suicide whilst showing his complete power over her. What he fails to see is that his power over her is only when she is alive. Hedda’s final power is her death, adding another layer to the bloody image.

Van Hove does not allow this image to become voyeuristic allowing shadows to darken Ruth Wilson’s slip dress, which she wears throughout the play, and it was at this point I realised why this production is so powerful.  Van Hove has staged it twice before, some years ago, and this is the first time with Patrick Marber’s version.  I don’t know how much Marber has made the translation his own – he himself is a playright.  Here I was watching the portrayal of a bitterly unpleasant woman who instigates utterly appalling, destructive acts.  I did not feel sympathy with her.  I did not become complicit with her.  I did not empathise with her.  Until that moment when Brack covers her with the can of tomato.  At that point, I saw a woman mentally and physically dominated by a man.  Because she is a woman.  It was a shocking realisation because this was watching something that happens in our 21st century society every day.  If Hedda is a monster (and this is not a misogynistic play or production) it is because that is what society has created.  It’s an extreme moment, but it is truthful.

Ruth Wilson is utterly compelling.  Watching her face at the curtain call, that strange moment when our enchantment is shattered, she looked to me like someone who had not fully waken up from a vivid dream.  From the start she is in mental pain, but the pain is mostly internalised only flashing out occasionally in anger or abandon.  This mental pain inhabits her whole body throughout.  It is hard to take your eyes off her.  The whole cast is excellent.  Going against convention they are young.  Brack  is full of sexual energy, Tesman (Kyle Soller) unusually not an academic fuddy-duddy, but full of his own youthful energy and passion, unfortunately focused on books and research.  Eve Magyar’s slightly sinister all-seeing Berthe never leaves.   Chukwudi Iwuji’s Lovborgis a heartbreakingly fragile reformed alcoholic.  Sinead Matthews plays a diginified Mrs Elvsted, with a class inferiority to Hedda and yet who is  the one who frees herself from the men who shape her destiny.   Kate Duchene’s Aunt Juliana underneath the social norms, unnervingly implies her desire to defeat Hedda.

Ibsen’s play has been reworked but not uprooted.  As the play draws to its cruel close, the lighting becomes brutal, searing into the actors’ eyes.  This light of interrogation is not the end however.  The stage is clothed in semi-darkness as Hedda’s body falls, leaving the rest of the cast back in the dusk of misunderstanding and self-delusion.