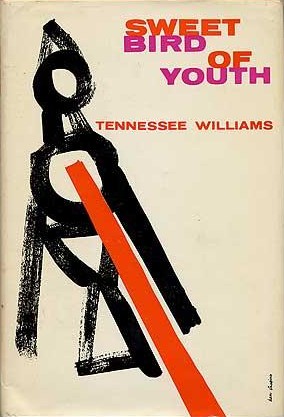 And so to Chichester and back in a day for a matinee of Tennessee Williams’ 1959 play.  Before I go any  further I have to confess to not being a particular fan of Williams’ plays, though I understand their appeal. I didn’t know this play at all, was vaguely aware it was written when he was filling himself with high levels of alcohol and drugs, and that it is regarded as somewhat secondary to Cat On a Hot Tin Roof, A Streetcar Named Desire and The Glass Menagerie.

Well I have to agree that the play has weaknesses but Jonatahn Kent’s production absolutely plays to its strengths and I found myself held by it  from start to finish.

I don’t think Chichester’s thrust stage is the easiest performing area for the play, but it is a brave decision to do it  in the main house because it is not a crowd-puller;  it is a thoughtful choice in Daniel Evans’ first season as Artistic Director.   Anthony Ward’s beautiful design is in keeps an intimacy at eye level but dominating above is a strange cloud/shroud-like construction.  Sitting at the side of the stage where I was, you are aware of its length,  However from the front it is foreshortened and dominates ominously and almost claustrophobically.  Ward uses tall shutters at the back in such a way that their colour, movement and Mark Henderson’s light, on and through them, avoids this design as cliche.

The structure of the play is problematic.  It begins with what are basically two two-hander scenes for the lead actors in which very little happens.  The energy then switches as the setting broadens its social scope. The second half has a lot more characters, none of whom are drawn with much depth and  most of whom have only short scenes of dialogue.  There is also a broader political element here which for me doesn’t quite mesh with the overall plot.

So it seems to me that the two lead actors have to be the glue to hold the piece, and Marcia Gay Harden and Brian J. Smith absolutely succeed.  I have to admit being a little weary of the tragic faded actress character which too easily can become caricature.   What I really admired about Gay Harden and Smith was that they don’t overplay The Princess  and Chance.  Instead they have created two people who feel reachable.  I believed in them both.  Despite the Princess’s regular reference to them both being monsters, their tragedy was in that they were both quite human.  Gay Harden’s Princess has accepted her fate – got out while the going is good – but despite her character’s alcohol intake and ability to forget what she wants to, her performance never falls into melodrama.  Smith has a dull but not dead look in his eyes, and he shows the boy that Chance started out as, as still being there within him.  Part of his tragedy is his inability to see it’s not just The Princess but also some of his home townspeople still care for this prodigal son.  In the second half, a simmering violent tension builds but does not explode directly around the drunken Chance as I expected. It is Boss Finley’s (very well played by Richard Cordery) televised racist rally, based in reality, that is a shocking climax, shown on lowered small video screens around the auditorium, so that the audience has the chance to get watch the speech at one remove, and then powerfully witness first-hand the following onstage beating.

The last scene is weak but again Gay Harden and Smith hold it.  The tragedy is as quiet as she shuts the door on her final exit.  Chance’s final moments are arresting and very moving in a beautiful stage picture.

Reflecting on the play in hindsight, its inconsistencies  and weaknesses in plot, structure and characterisation become more obvious.   This fine production sidelines them and  mines the depths of this flawed, fascinating play.