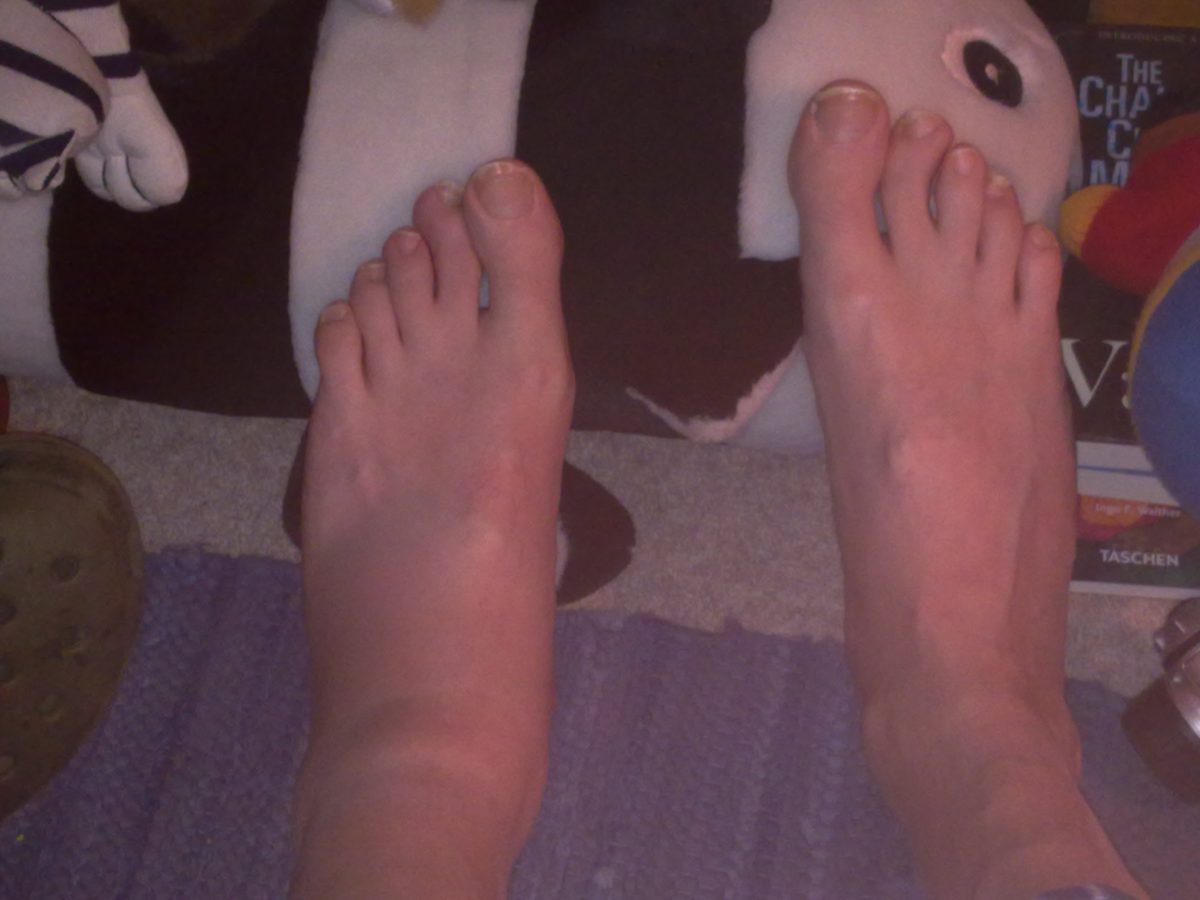 I just came across this write-up from 2010 I’d sent to friends and I didn’t want to delete it, so posting it here.  It is slightly hysterical in tone:

How I Broke My Leg by Hopalong Bert

Due to popular demand, here is what happened:

My boots which I wear all day every day, have been through so many repairs I couldn’t justify another patch up.  (Comfortable boots are like old friends).  I had a small hole in one toe and the tread had worn down again and I was slipping a bit on them.  So I decided to go and buy a new pair in the West End – they originally came from Next.  Well I started in John Lewis buying a lightbulb (wrong type) and looking at digital radios as ours has bust, and pottering for Christmas present ideas.  Then I passed a Zara – one of my favourite shops – and nearly bought a jacket and dufflecoat but decided  I couldn’t afford or need either. Then I went down Regent Street to Next.  That’s right, there isn’t a Next on Regent Street.  So I ended up passing another Zara.  Hmmmmm…just pop in and look at them again.  Decided against jacket but thought I would treat myself to £90 dufflecoat, as I have just paid off my credit card (that would be the bill of the Nicole Farhi £hem-hem dufflecoat to add to my 2 other dufflecoats. You can never have too many dufflecoats.)  Credit card declined so I had to pay out of my current account, the whole point being not to pay for it from current account as it was a treat to pay off over 2 months on credit card.

As leaving shop slipped because worn boot treads, ankle bent outwards and I landed on ground knocking my head (not hard).  5 people came to my rescue, but of course I was so embarrassed I got to my feet saying I was OK and hobbled off.  My logic now was to get to Next and get more boots.  Got to Charing Cross Road very slowly and pain quite bad so stopped for a hot chocolate in favourite cafe.  Then got to Next by Charing Cross Station – line discontinued.

Hobbled up to Church’s in Covent Garden – changed to Jones the Bootmaker (when?) and no use.  Hobbled up to Floral Street and went in a few shops including Paul Smith (what was I thinking going in there?) determined to get a new pair before I fell again.  Snowing by this time.   Ended up on Long Acre and saw a Russell and Bromley.  Pain was getting quite bad now, but fortunately they had a fantastic pair of boots (£125 bargain).  Credit card declined again.

Staggered home, found ankle very swollen (see photo) and next morning bruised as well.  Rang neighbour who drove me to doctor.  Doctor said probably wasn’t broken but to go to hospital anyway.  Neighbour drove me and said to ring when finished if I didn’t want to go home on bus.

Well all this only took about 4 hours and I was out by 3pm (I thought I would be in till at least 6pm).  I had to sit with naked toes and crutches by opening-and-closing door at A and E entrance.  Note: it is FREEZING temperatures at the moment here.  Rang neighbour who was not home yet, rang everyone else I could think of – no one available so I rang for a taxi.  30 minute wait.  I explained I was by door of A and E with leg in plaster and you couldn’t miss me.  30 mins or so went by and Taxi man arrives asking for “Caroline” who is on crutches and going to same area as I live.  Well I thought there had been a mix-up and it was for me, so we had a laugh at me being Caroline and I got in taxi  – to realise it was a different taxi firm and Caroline’s address was not mine.  So I battled back out of taxi and waited few more mins, before realising it was now 45 mins since initial call – so rang back.  Told driver had turned up, couldn’t find me and gone away again.  Deep breath.  How long for another taxi?  60 mins.  I  know what happened – Hospital has a new big main entrance (probably where Caroline was) and A and E is a small entrance near to hospital’s original one.  Which is why  I had emphasised to taxi firm exactly where I was.  What’s the betting he went to main entrance?

Well by this time I was ready to cry.  It was snowing outside and no way I could get a bus.  School run had merged into rush hour as well,l hence no taxis.  As a last resort I contacted my brother in law who is a consultant in hospital (I know it seems stupid not to have done this before but I didn’t think he could drop everything unexpectedly for me, and at the time a 30 min taxi wait was bearable.)  So he came to my rescue and drove me home. And has since forwarded me my x-ray.

And I have a lovely pair of boots and 4 duffle coats (one brand new) which I can’t wear as I can’t leave the flat.

And a looming overdraft.

My card was declined as it had expired.  I so rarely use it  I had not noticed.  I’d been sent new one in May.  No idea where that is – under a pile of things somewhere no doubt.