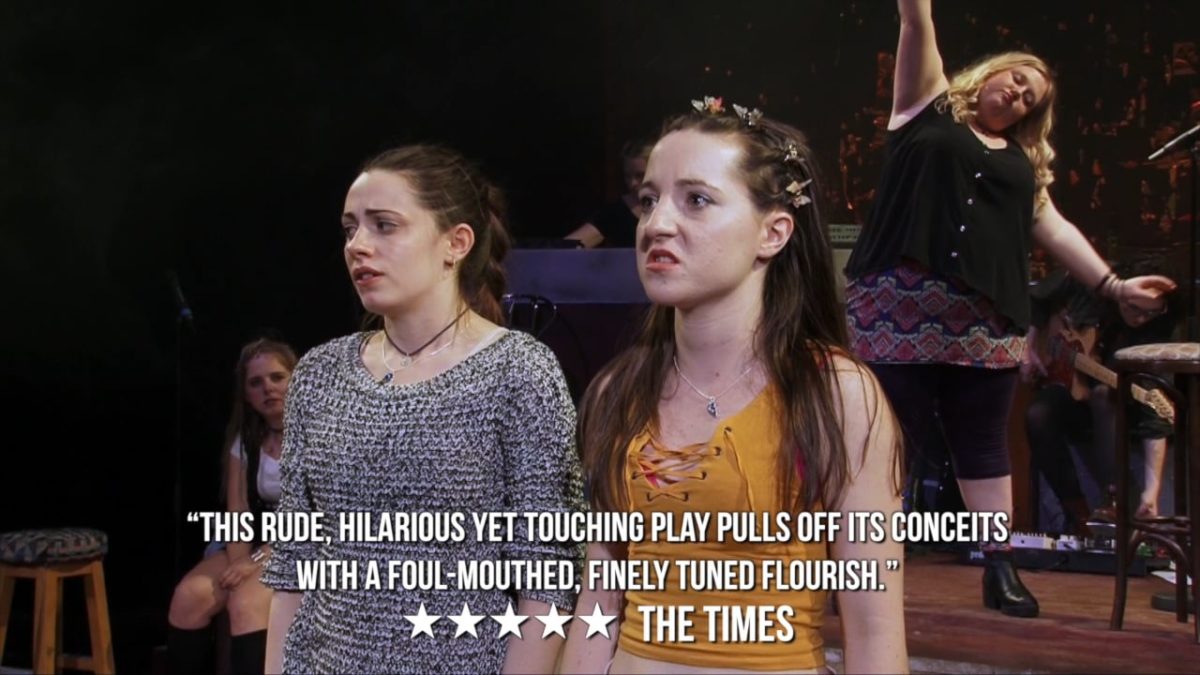 This National Theatre of Scotland production of Lee Hall’s play based on the book The Sopranos by Alan Warner (I can’t imagine why they changed the name), has reached London for a run in the tiny Dorfman Theatre.

(Sensitive readers be aware – this play is about sober and drunk teenage girls talking about, looking for and having sex.  Bawdy is a bit of an understatement.)

The reviews have been very good on the whole and Saturday Review had raved about it.  Then my theatre buddy told me she loathed the text as she found it untruthful.  So I went off with an open mind and  I fell a little between two stools.

Let’s get my negative comments out of the way, because they are outweighed by the positive ones.

for the last 15 minutes as I was so emotional I thought I was going to break down.

For those of you who don’t know the name Lee Hall, you probably will be familiar with the title Billy Elliot.  That film was filmed in a coal mining village near where my father grew up.  Like Billy, my father refused to go down the mines and left to make his own life (not as a ballet dancer…)

Hall wrote a play called The Pitman Painters, also staged in the Dorfman (the Cottesloe as it was then) about a group of miners who got together to paint, and in their own time became quite famous.  Indeed one of their paintings is in my family.  Lee writes about how art can change people’s lives: how it can free them from suffocating expectations and give them aspirations.  That is something which never ceases to move me and give me hope.  Billy dances, the pitmen paint and in Our Ladies, the girls make music.

Six astonishing actors play all the parts, but mainly the six convent girls, on a trip to Edinburgh from their small Scottish coastal town, for a choral competition.  But they are desperate to lose as they want to get back to their local pub, The Mantrap, as they have heard a bunch of Navy submariners are in the town that night.

Backed by a trio of musicians it is an evening of angelic and ballsy singing as the girls punctuate their mostly sexual adventures with song.  It is (verbally) explicit and hilariously funny, and probably most so if you are Catholic, but all the time you know these girls who are bursting with the zest of life as adolescents on the cusp of adulthood, are potentially trapped.  We are told many times how many pregnancies there are in the convent, as a statue of the Virgin Mary looks out over the stage. And finally one girl’s story reveals that class and money make no difference, in one of the most moving scenes in the play.

I think to say the text doesn’t capture the truth of the inner life of teenage girls ultimately doesn’t matter as it makes the play too specific. As directed by Vicky Featherstone, and performed by actors who give the most amazing commitment to their parts, this is about  anyone and everyone’s search for love and a hope to find worth and respect for who we are as human beings.  That’s why ultimately I was overwhelmed, and that’s why this is really worth seeing.

No doubt a long debate with my friend will ensue when we next meet.