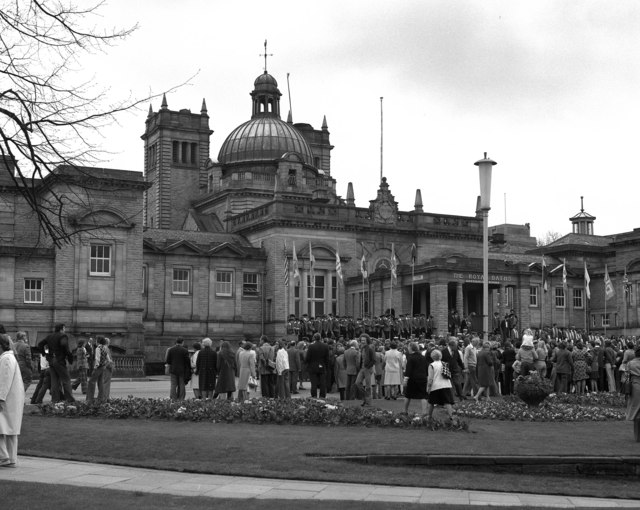 having something against Crossroads which in my head is linked to it being on ITV.  (Not that my Mother has ever had strong opinions on anything or anyone – just mention Vera Lynn, Nigella, Gracie Fields, Zandra Rhodes, Twiggy or any divorced famous person.  She has no problem with Boy George or Julian Clary or Gregory Peck.) And then of course back then in the 1970’s we had the Three-Day-Week.  Astonishing to think about it now.   Right before The Magic Roundabout (one of the greatest television programmes ever) all the electricity would go off.  We lit candles as it was the winter months and did goodness knows what.  I probably went to bed.

There were some programmes that I had to be in bed before they started: Bouquet of Barbed Wire, Soap and Monty Python being the three which stick in my memory.  Yet it was perfectly OK to watch Kenny Everett and Hot Gossip, that latter of which my Mother thought were marvellous.  Harrogate of course banned the Life of Brian from the cinema.  I remember the Head Girl of my school having a letter published in the local newspaper saying that in the light of the ban, Russ Meyer’s Beneath the Valley of the Ultra Vixens (showing in Screen 2) was presumably a nature documentary.

I remember the first film in the newly opened, but no longer existing ABC cinema being Lady Caroline Lamb.  Goodness knows why that’s stuck in my head.  The first film I ever saw in the cinema was The Jungle Book.  My brother took me. I remember seeing The Towering Inferno and having awful nightmares after.  I wasn’t allowed to see Jaws (in hindsight a good thing).  Tommy was my first AA film – thinking on it, that had child abuse in it. Can’t remember my first X, oddly.  The Man About The House feature film was one birthday outing lowlight.  Logan’s Run remembered because poor Jenny Agutter gratuitously took off all her clothes briefly.  The height of female sexual expression when I was under ten years old was Raquel Welch’ s cleavage.  I think bosoms (or boosoms as my North- Eastern Father pronounces it) is the word we children used, alongside hand gestures to show how enormous they were.  when I was older I remember my best friend going off to see one of the Emmanuelle films and telling his mother who laughed.  I was utterly shocked.

The film Agatha was shot around Harrogate.  My friend and his mother got caught in one of the scene shoots and had to hide behind a Royal Baths pillar (see above).  The filmakers (understandably) used York railway station as Harrogate’s which I found very funny.  There was another film with Vanessa Redgrave in it called Wetherby.  She played a teacher and it was filmed in my school, but I think after I had left.  That was a bit weird.  My claim to fame was singing in the chorus of a production of Joseph and the Technicolor Dreamcoat at Harrogate Theatre.  I was very bitter when I had to leave  the production before the end of  the run because we were going on holiday.  My Mum took me on a surprise visit to see Salad Days there on the pretext of going “to post a letter at the main post office”(I obviously wasn’t a bright enough child to see through that one, local postboxes abounding everywhere).  We sat in the gods and that was the moment I knew I wanted to work in the theatre.  Then we used to go and see mostly Agatha Christie adaptations and Alan Ayckbourn plays of a Saturday afternoon.  I remember Kate O’ Mara in Hedda Gabler, Ben Kingsley in Kean, Victoria Wood doing her own show making me cry with laughter, and wanting the ground to swallow me up in Alan Bennett’s Habeas Corpus.

Apologies to anyone not born in the UK when I was, and who will have no idea what I am going on about.  It’ll all be on Google, YouTube, Wikipedia, Imdb etc.