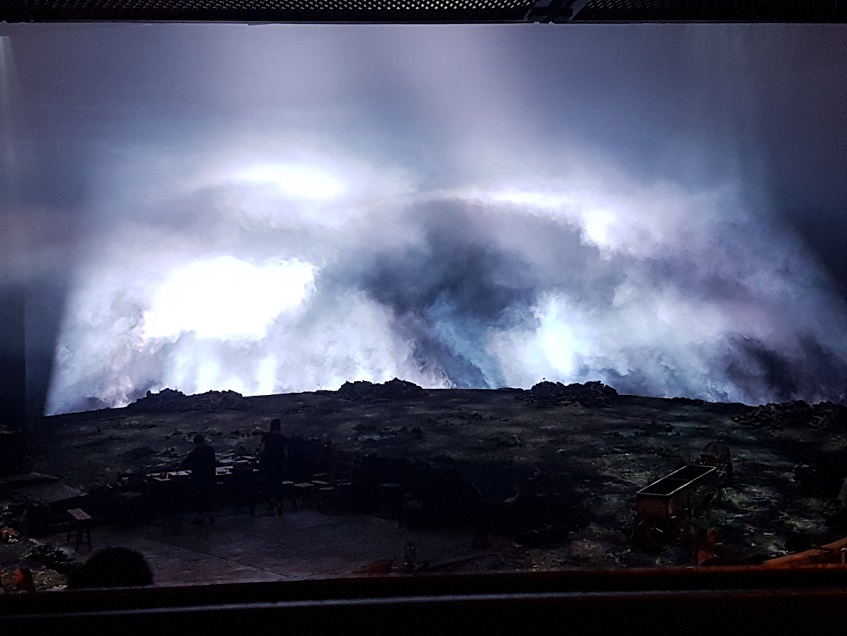 I hate to start a review by praising the set, as this gives the impression that design is better than the content. However the set for the National Theatre’s production of Translations is genuinely one of the most beautiful things I have ever seen in a theatre.  The photo above doesn’t do it justice.  It’s an Irish landscape, a moor where the peat is being cut.  This surrounds a man-made space which is a hedge-school.  These were local and locally-run schools in Irish villages, common all over Ireland at this time – the play is set in the early 1830’s – to educate Catholic children and which would eventually be replaced by state-run schools in which English will be the official language.  The children were taught in houses or barns.   In this design it was a house and it took me a while to realise the design for it was to have no (i.e. imaginary) walls.  It was dominated by the most extraordinary visualisation of an Irish sky, beginning with the setting sun in the first half, and rainstorm in the second.  The effect was achieved with lighting and controlled haze (goodness knows how they achieved that but I presume using large fans) to create clouds. It was stunning.  I was with an Irish acquaintance from Dublin who said she felt she was looking at a real Irish sky. The house  was an intimate area for the actors, whilst the moor and sky drew the action onto an almost epic scale, and let you remember how much landscape shapes people’s lives.

Just like the trick of the house’s invisible walls, so the play text plays tricks with language. The father and son teachers in he school teach Latin and Greek as well as their native Gaelic.  When the other brother returns having been away for some years, he comes back with English soldiers who are making a map of Ireland and in so doing translating the place names into English.  The whole play is  in spoken English but when the soldiers turn up, the audience comes to realise that they don’t understand the (Gaelic-speaking) Irish and vice versa.  Only the teachers can speak both languages and so are left to translate. It’s a brilliant device used by Brian Friel in this play which many people consider his masterpiece. The landscape an language are inexorably tied together.

Irish history is complex and I am too ignorant of it to write much here, but whereas the play could be a simple attack on colonialism, it is in fact a beautiful, nuanced examination of the beauty and dangers of  differing and common languages.  In one scene, an English soldier and a Irish woman express their attraction to each other without having a common language.  It is a beautiful, romantic scene but one which is undercut with dangerous currents.  The play has a tragic conclusion, but the horrors are left unseen and  the impact is all the stronger.  We know the future for these people; we are watching it being made.  The final stage picture converts 19th century Ireland into a stark, silent, menacing image of barbed wire and guns, which I felt was unnecessary.  In today’s tumultuous world of immigration, broken and newly created borders, individualism, and closed and open communities, the play quietly spoke for itself.  It was therefore with some surprise that I saw it was written in 1979.